In a press conference at City Hall this morning, operators of the Austin City Limits Music Festival, C3 Presents, gave Austin’s parks $6.3 million for park improvements all over the city, and presented the economic impact study compiled by Austin-based firm Angelou Economics.

Austin’s Mayor Adler spoke to attendees about the importance of ACL Music Festival’s gift and presence in the city saying “There is no better brand than being the live music capitol of the world…everybody in the city of Austin won with ACL.”

For the past fifteen years, ACL Music Festival has been a staple of the Austin music and festival scene, drawing visitors and locals alike. But the festival is more than a revenue generator for local hotels, restaurants and attracations – it also boosts the health of our local parks system.

Speaking on behalf of Austin Parks Foundation, CEO Colin Wallis said “North of $26 million have gone back into our parks [thanks to ACL Music Festival], and the real story is – money from ACL has gone back into your neighborhood parks.”

The study by Angelou found the festival had an estimated $277.4 million impact on the city’s economy. In addition to this windfall, the event has produced huge gains for Austin’s parks, through the work of APF as detailed in the infographic below.

Acting City Manager and previous Parks & Recreation Department Director, Sarah Hensley, said of the festival “They [ACL & C3 Presents] are the best stewards of our parks. They are investing in our community.”

Austin Parks Foundation is proud to partner with the festival on improving Austin’s parks, trails and green spaces and looks forward to continuing this great partnership with the 2017 ACL Music Festival. A portion of 2017 ticket sales and other revenues will again be gifted to Austin’s parks. Ticket sales for ACL Music festival 2017 go on sale Thursday. 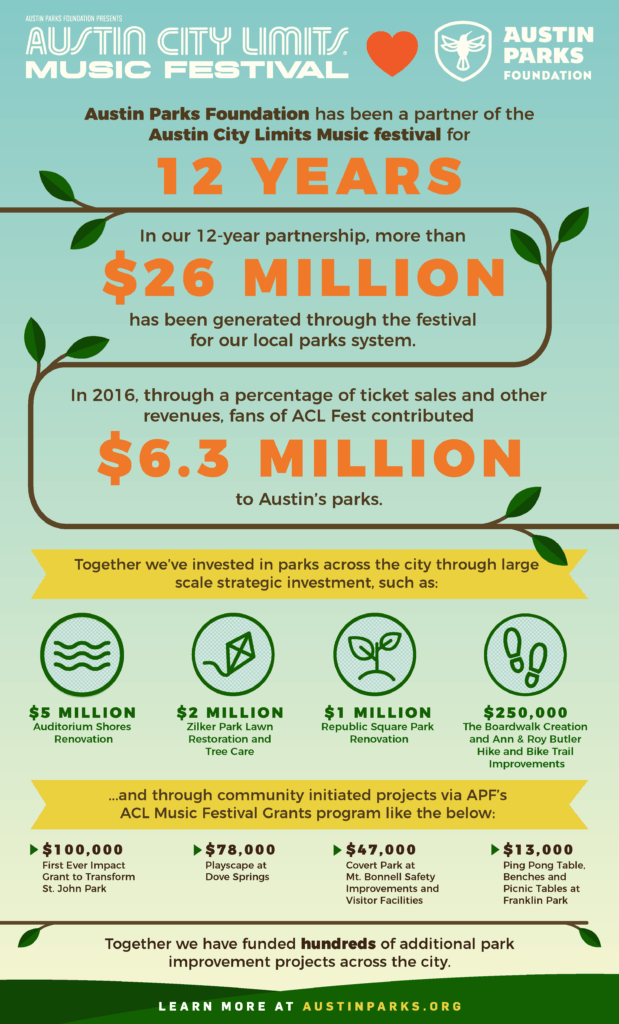