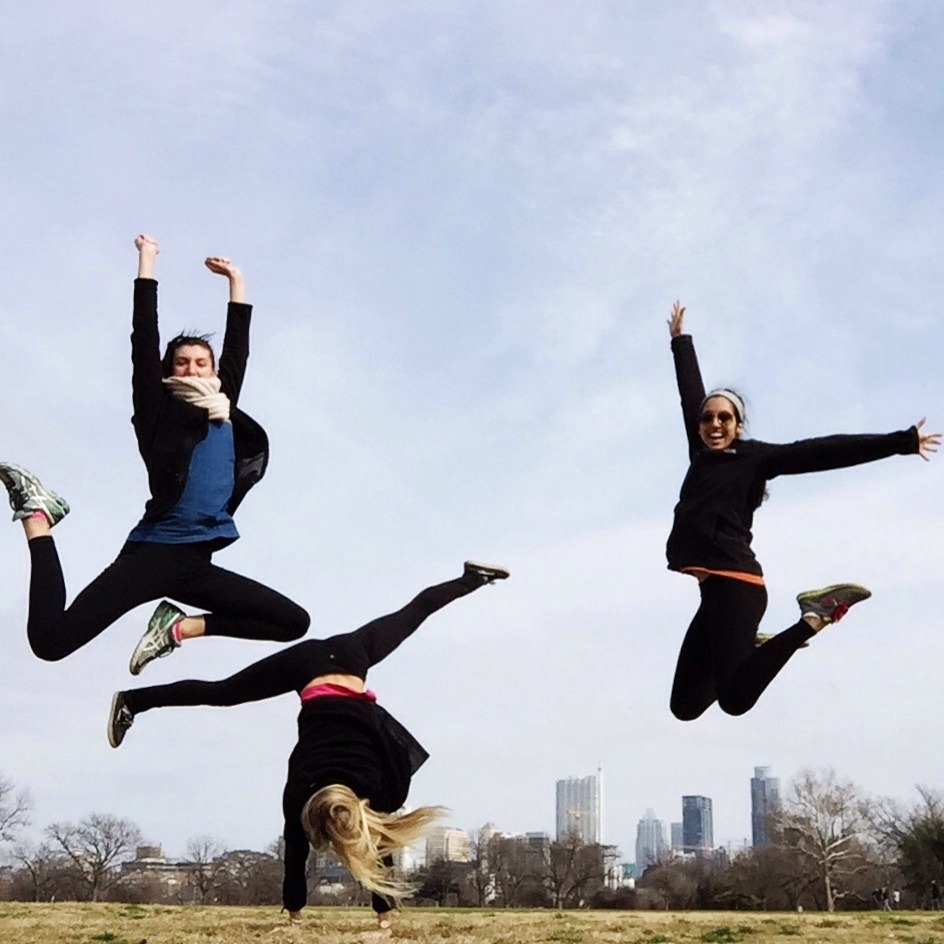 Austin Parks Foundation provides the ACL Music Festival grants to empower park adopters to make a lasting impact in their local parks. Since 2010, APF has awarded nearly $1,500,000 in grants to park improvement projects.

Since 2006, Austin Parks Foundation has funded over 120 park projects in the greater Austin area, each of which has been led by an individual Adopt-A-Park or neighborhood group. Read on for a glimpse into the projects this round of grants will fund in Austin’s parks.

Alderbrook Park has been under development for several years. In partnership with the Lady Bird Johnson Wildflower Center it was the site of APF’s Habiturf pilot project, and the park adopters have worked hard to make the park a community gathering place. The ACL Grant they have just received will be used to install a much-needed, ADA accessible trail around the perimeter of the park.

“According to PARD, walking paths/trails are the #1 recreational amenity desired by neighborhoods. We are especially interested in adding this trail to jumpstart the development of the following phases of the park, but also to provide a much-needed walking trail in our neighborhood. Northstar is bordered on all four sides by busy streets (but especially Metric Blvd., Parmer Lane and Mopac). It’s virtually impossible to safely walk outside our neighborhood boundaries,” said Friends of Alderbrook.

The new trail will be a win for accessibility and we are excited to see the finished product!

The West Point Society of Central Texas adopted the park in 2010 and since that time has led many activities. Projects have included support for the installation of an information kiosk, the restoration of historic views from the mountaintop, and the design and installation of a 5,000 pound granite memorial commemorating the 75th anniversary of the gift of Mount Bonnell to the people of Travis County.

This year, the park adopters have been awarded an ACL grant to install new steps in dangerous areas of the trail at covert park and Mt. Bonnell. In partnership with PARD a “shovel-ready” plan has been developed to install limestone steps at 3 extremely hazardous trail sites, each of which drop off 24-48 inches, as well as 2 additional trail locations, both with drops of less than 24 inches, and 2 sets of existing steps that are in need of restorative work.

These drops pose serious obstacles and safety hazards to visitors, but with this grant, the new steps will help prevent injury to visitors and encourage use of the established trails.

The Barton Hills Community Park was created when the Elementary school was built in 1964, and there have not been many improvements made to the park grounds since its creation, with the exception of community efforts to add perennial gardens and vegetable gardens, and the addition of trees. The park is small but has a lovely, hilly terrain that is need of basic improvements in order to maintain the integrity of the grounds. That’s why the Friends of Barton Hills Community Park have been awarded and ACL Grant to prevent erosion, protect the trees and increase accessibility in the park.

The goals for the park include improving the steep slopes with terracing that can also be used as seating, installing a trench to mitigate drainage issues, solving erosion and drainage concerns while creating connectivity to portions of the upper and lower areas of the park, and creating a more accessible and appealing area that is currently under-utilized.

Balcones District Park is a green oasis in northwest Austin, and a source of great pride for the surrounding neighborhoods. For years the Milwood Neighborhood Association and the Walnut Crossing Neighborhood Association have organized clean-up and maintenance efforts, and the park is home to the community’s 4th of July Picnic as well as the meeting place for many local sport and social groups – including APF’s Fitness in the Park program in partnership with CorePower Yoga.

Because of the lack of cover in high-use areas, however, the park is under-utilized during warmer months of the year. The playground equipment gets painfully hot even in morning sun, and the pool area has minimal shade for users and onlookers alike. In addition, although the park has wonderful open spaces, it lacks any kind of pavilion for large gatherings such as local festivals and celebrations. The ACL Grant that these park adopters have been awarded will help install new shade structures in each of these areas.

“As official Park Adopters for Balcones Park, we are constantly working on ways to support and grow this precious resource so that it can continue to flourish. We feel so blessed to have this outdoor space! Adding these permanent shade structures will open up Balcones Park to even more members of our community,” said the Neighborhood Associations.

Goat Cave Karst Preserve sits on eight acres in South Austin and contains water-formed caves and sinkholes typical of the Edwards Aquifer limestone. Goat Cave, and many other caves and karst features, are conduits for water from the surface to enter groundwater systems. This ACL Grant will allow the park adopters to install new educational signage, benches and a new information kiosk.

“With the community behind us, we hope to make a real and tangible difference at the Preserve. Beyond this kiosk and educational materials, we hope to work with AISD… to educate individuals about ways to protect our water supply and karst recharge features,” said the Save Barton Creek Association.

The Northstar Greenbelt meanders through the Gracywoods Neighborhood, just south of Walnut Creek Metro Park. As part of Watershed Protection and PARD’s emphasis on Riparian Restoration, Northstar has been identified as a candidate for a Grow Zone. In light of this, the park adopters have been awarded an ACL Grant to install an information kiosk that will serve as a source of info on the new growth along the greenbelt.

“The information available on this Kiosk will help the park visitors understand the “let it grow” process. The change from over-mown to no-mow are uncomfortable to a significant percent of the residents who view the aggressive growth of less desirable vegetation during the transition as dangerous and ugly, and these same folks need the advantage of long term vision and interpretive signage,” said the park adopters.

The Mayfield-Gutsch Cottage and Gardens are a registered City of Austin Historic Landmark and are also listed on the National Register of Historic Places. One of the defining features specifically called out in the National Register narrative of the cottage and garden grounds is the extensive rock walls, arches and gates. Through the passage of time, natural forces along with the deterioration of the rock work’s structural integrity has resulted in the collapse of the walls in many areas.

This ACL Grant will allow the park adopters to repair this historically significant rock wall and make up for some of the structural issues that were it’s downfall.

“Mayfield Park, the cottage and gardens as well as the preserve, are unparalleled assets in the City’s park system, and this repair of the park’s historic fabric is worthy of funding,” said Catherine Kyle, President of the West Austin Neighborhood Group, and neighbor to the park.

Since 1995, The Austin Ridge Riders Mountain Bike Club volunteers have designed, built and maintained trails at Walnut Creek Metropolitan Park – one of the most popular places for outdoor recreation in the Austin area. With its network of over 11 miles of trail, hundreds of people use the park for family parties, hiking, biking and walking dogs each day.

The new bike commuter path has added a new dimension to the park with paved routes that provide connectivity to major employers and more accessibility for park users. Although the new commuter bike trail is a wonderful addition to the number of bicycling routes, The Northern Walnut Creek Bike Trail has intersections with many parts of the natural surface trails at Walnut Creek Metropolitan Park. Specifically, there are problematic areas where the concrete path cuts through several points of popular trail causing blind 4-way intersections, and subsequently making the passage unsafe for the new mix of commuters and mountain bikers, hikers and families.

The Austin Ridge Riders Board of Directors identified an urgent need to reroute approximately 7,500 linear feet of existing natural surface trails around the new paved bike pathway to ameliorate the blind corners and 4-way intersections. The ACL Grant they have been awarded will allow them to repair, re-route and restore portions of heavily used natural surface trails throughout the park.

“These re-routes will create a safer park experience by eliminating the trail crossings at certain intersections. We believe the trail improvements will make the park a safer and more enjoyable environment for all users,” said the Austin Ridge Riders.

The Walnut Creek Pool is located within Walnut Creek Metro Park in North Austin, and was built in the early 80s. Without considerable renovation since then, the pool and pool house continue to serve the adjacent neighborhoods with low-cost aquatic recreation. However, these amenities are nearing the end of useful life with no replacement plans are on the horizon.

The newly-awarded ACL Grant will refinish the walls, floors and ceiling of the pool house interior, continue landscaping around the entry and inside flower beds incorporating native species and sustainable landscape practices, replace racing lines in the pool, and add a line reel to facilitate the pool’s use for lap swimming.

“The deteriorating condition of the pool house does not portray a welcome place for recreation, or a satisfying work place for staff. This grant will provide the regular maintenance necessary to keep this facility operating, give the community a dignified recreation opportunity, and increase the morale of the staff,” said William Glass, Project Manager and Grant Coordinator for Friends of Walnut Creek Park Pool.

APF Awarded Over $280,000 in 2018 Fall Community, Neighborhood and Impact Grants

Get Out Of Town! 6 Austin Nature Escapes For Spring Break

Project Playback: A Deep Dive Into Our Investment at Deep Eddy Pool