AUSTIN, TEXAS (January 16, 2019) – Austin Parks Foundation (APF) is thrilled to announce their 2018 fall grantees that will receive over $280,000 in collective funding to improve various Austin parks, trails and green spaces.

Georgian Acres Neighborhood Park has been awarded the 2018 ACL Music Festival Impact Grant of $100,000 to support the development of the park. Additionally, Dell Technologies Match Play has matched APF’s gift to support the park, located in District 4, one of the most parkland deficient areas of the city. The APF grant will be used to fund the building of a basketball court, a kiosk and a pavilion, plus amenities like tables and grills. Other components of the development of the park include playscapes (for ages 2-5 and 5-12), walking trails, a swing set, a net climber and amenities such as bike racks, benches and small connector trails to adjacent apartments. The development process is conducted by the Austin Parks and Recreation Department in conjunction with District 4 and is expected to begin in the coming months.

The Impact Grant of $100,000 is awarded annually to support large, community-initiated, physical park improvements. APF’s inaugural Impact Grant went towards the redevelopment of St. John Park in 2017. The park recently broke ground on the renovation, and it is expected to be completed early in 2019. The deadline to apply for the Impact Grant is October 30. One grant is awarded annually through a highly competitive process with a grant period of 24 months.

“From a major development like Georgian Acres Park to minor improvements like landscaping or enhancing a picnic area, at APF, we’re dedicated to strengthening our city’s entire parks system,” said Ladye Anne Wofford, Chief Mission Officer at Austin Parks Foundation. “We are proud to partner with and financially support amazing community park stewards who are working hard to enhance our green spaces all across the city so that all Austinites can have access to great parks.”

In addition to the $172,000 given through their 2018 spring Community Grant program, APF awarded $148,970 in grants for the Foundation’s fall cycle. APF’s Community Grants are intended for larger community-initiated physical park improvement projects that require between $5,000 and $50,000 in funding. These grants are offered twice a year with a grant period of 12 months and are awarded through a competitive process. Applications are accepted April 30 and September 30 each year. The following parks and green spaces received a grant for Fall 2018:

The goal of the ACL Music Festival Grants Program is to expand the reach of Austin City Limits Music Festival’s generosity and offer more opportunities for local park adopters to take ownership of the care and maintenance of their neighborhood parks. More than $3 million in grants have been given by APF since 2006 with the goal of supporting projects like signage installations, trail building and planning, physical improvements, and maintenance.

For more information about APF’s Grant Program and to apply, please visit austinparks.org/grants.

Austin Parks Foundation (APF) is dedicated to partnering with our community to enhance people’s lives by making our public parks, trails, and green spaces better through volunteerism, innovative programming, advocacy, and financial support. A non-profit established in 1992, APF fills the city’s funding and resource gap in order to develop, maintain, and enhance the area’s 300+ parks, trails, and green spaces. APF fosters innovative public/private partnerships and since 2006, has given over $3 million in community-initiated grants in service to the greater Austin community. APF is known for its annual flagship volunteer event, It’s My Park Day, and is a presenting partner and beneficiary of the popular Austin City Limits Music Festival at Zilker Metropolitan Park. For more information, please visit www.austinparks.org. 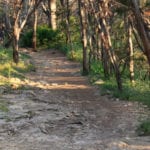