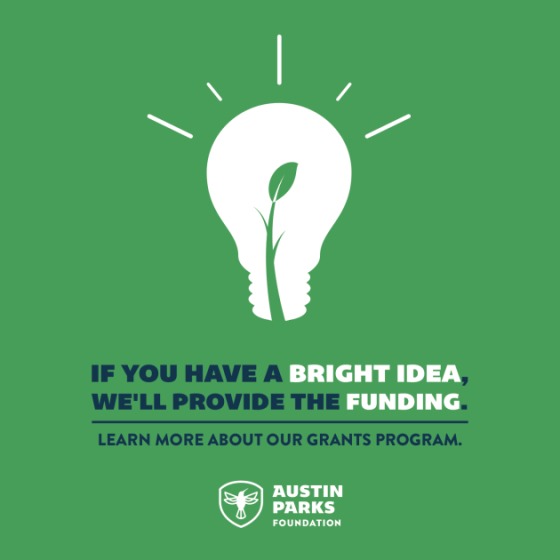 Austin Parks Foundation provides these grants as direct financial support to volunteers who have signed on as adopters , through the Adopt-A-Park program and since 2010, APF has awarded over $1,250,00 in grants to park improvement projects like renovations at Ramsey Park in 2014, and a new playscape at Ponciana Park in 2014.

“Thanks to this grant from the Austin Parks Foundation, we’ll be able to kick start our first playscape, thereby increasing public participation in [Ponciana] park, promoting physical activity to the kids and families in the neighborhood, and helping to reduce crime by promoting positive use of the space,” said Alesha Larkin. “With the help of the Austin Parks Foundation, a small group of committed volunteers can accomplish many benefits for their neighborhood,” Larkin said.

Since 2006, Austin Parks Foundation has funded over 120 park projects in the greater Austin area, each of which has been led by an individual Adopt-A-Park or neighborhood group. “We are proud to be able to offer support to these park champions,” said Ladye Anne Wofford, Programs Director at Austin Parks Foundation. “We are inspired by their dedication to improving their communities and neighborhoods, and have seen first-hand the success that follows when people take ownership of improving their parks.”

Past park projects have included everything from play equipment to park furnishings, tree planting, trail construction, invasive species removal and dog park improvements. Funding for the ACL Music Festival Grants Program is donated to the Austin Parks Foundation each year by the Austin City Limits Music Festival in order to maintain Austin’s parks and public lands.

“ACL has been a great partner to us and the Austin community,” said Colin Wallis, Executive Director at Austin Parks Foundation. “Their generosity has allowed us to empower more park adopter groups each year, and we’re grateful for the positive impact this program has on our parks.”

APF Awarded Over $280,000 in 2018 Fall Community, Neighborhood and Impact Grants

Get Out Of Town! 6 Austin Nature Escapes For Spring Break

Project Playback: A Deep Dive Into Our Investment at Deep Eddy Pool