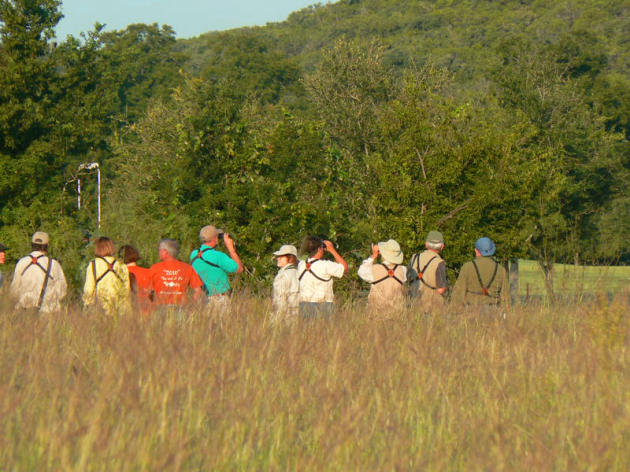 by Diane Sherrill, Commons Ford Prairie Restoration Organization
Commons Ford Metropolitan Park has been a favorite spot for birders for some time, especially Ed Fair. When it was brought to his attention (by Byron Stone, another well respected birder) that most of the park’s vegetation was invasive, non-native grasses; and that those grasses did not support the grassland birds and wildlife that are in decline as the prairies disappear, Ed decided to do something about it. The first planning meeting for Commons Ford Prairie Restoration Organization (CFPRO) was held in February, 2010, and has grown into a community organization composed of about 120 members.
The sole focus of CFPRO is to remove the non-native plant species in the 40 acre center tract of the park and restore the prairie back to native grasses, wildflowers and the animals that need them. This is a significant and environmentally sound project, preserving the natural heritage, native vegetation and wildlife. It also offers tremendous educational opportunities for the community.
Partnerships were formed with numerous organizations and individuals: Austin Parks and Recreation Department, Austin Parks Foundation, Balcones Canyonlands Preserve (BCP), USDA/ Natural Resources Conservation Service, Native Prairies Association of Texas (NPAT), Travis Audubon Society, Native American Seed Company and numerous individual volunteers.
The project has raised more than $60,000 through December 31, 2012, not including in-kind contributions and volunteer time. Funds have been obtained from Austin Parks Foundation (who also acts as CFPRO’s charitable umbrella), TogetherGreen, Patagonia Stores, Field Guides and private donations.
Phase I of the project has been completed. Implementing a plan prepared by NPAT, glyphosate treatments were applied in summer and fall of 2011. Drought conditions prevented the planned prescribed burn. Post treatment tilling was done in February, 2012. A seed mix of about 70 native species, created by Native American Seed, with input from BCP staff and other plant and birding experts, was planted by Native American Seed in late February, 2012.
Heavy spring and summer rains resulted in strong initial wildflower growth as well as early successional native grasses. As of mid-fall, 2012, the prairie is seeding out appropriately with an expected result of strong growth of native plants in 2013. The result has proved evident given the significant number of song and prairie birds now already evident in the prairie.
Removing invasives permanently requires persistence. Bermuda grass remains in some areas and needs to be retreated followed by native seed replanted in the treated area. Without this continuing work, the Bermuda and other non-natives could retake the prairie.
Upcoming events with CFPRO