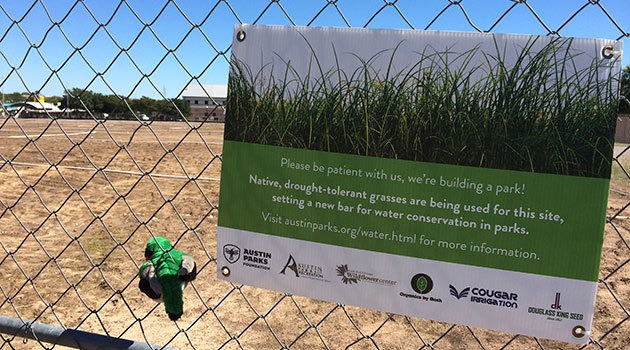 As part of our ongoing water conservation efforts, Austin Parks Foundation is involved in a pilot project using the Habiturf grass seed mix at a brand new pocket park in Northwest Austin called Alderbrook Park.
Habiturf is a mix of native southwestern grasses that includes blue grama, curly-mesquite, and buffalograss. Together, these three unique grasses appear green and are soft to the touch. Most importantly, thanks to its high density and deep roots, Habiturf requires little to no water once it is established. Unlike grasses traditionally used in park spaces, one rain event every four to six weeks is enough to keep this grass happy.
The once vacant, treeless two-acre property at Lamplight and Parmer Lane is the perfect candidate for a Habiturf grass pilot project. Habiturf loves sunshine, so it grows best in areas without a lot of trees. While it is comfortable to walk, play and sit on, it prefers low to medium traffic areas; areas around pathways or on the outskirts of high use areas, like sports fields, are ideal. Habiturf also grows well with native Texas wildflowers like bluebonnets.
Currently, Habiturf is in the early stages of establishment in Alderbrook Park. Over the summer, the site was scraped, and the soil was tested and prepped with a special soil mix. Then irrigation lines were strategically laid on the ground surface to assist the grass during the early stages of its life. In mid-September the grass was finally planted along with several pounds of bluebonnet seeds that should come up in the Spring!
There is still a fence around the property because it is important to let the grass get settled in for a while before people walk on it. The City hopes to remove the fence this winter so that neighbors will be able to enjoy their new park space and experience the wonders of drought-friendly Habiturf!
For more information about Habiturf, visit http://www.wildflower.org/habiturf/ or take a trip to the Ladybird Johnson Wildflower Center.