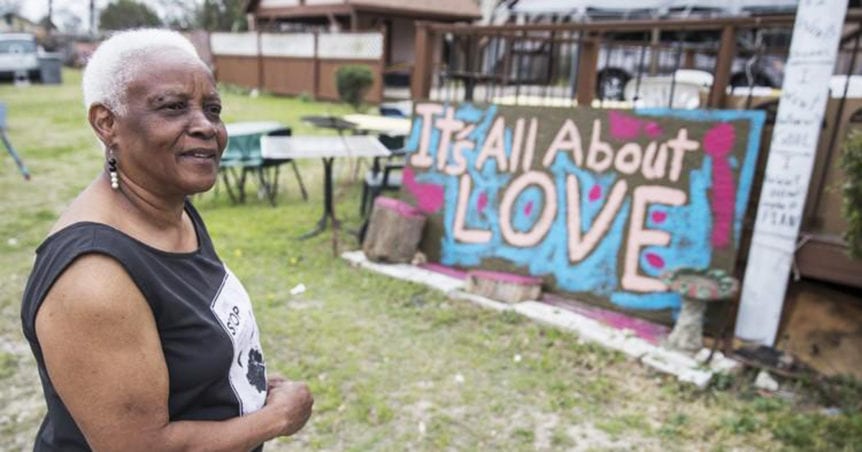 For the most part, Thelma Williams — also known as “Grandma Wisdom” — has lived in the St. John neighborhood since early childhood.

She remembers when the land — a slice of which recently benefited from an Austin Parks Foundation grant — belonged to the St. John Regular Baptist Association, started in 1867 by four black Baptist ministers who met under a live oak tree in Wheatville, the freedmen’s town west of what is now the University of Texas campus.

During the summer, the group’s relatively flat yet elevated 350-acre farm on land now in Northeast Austin hosted annual church encampments. Visitors from the countryside amassed in the tens of thousands for sermons, games, contests, parades and practical demonstrations.

“My family actually camped up here all week,” says Williams, 75, who served in the military from 1961 to 1967, graduated from St. Philip’s College with an associate degree in plumbing and later was employed as a licensed plumber. “My grandfather had a barbecue stand here.”

In the 1950s, when the Interregional Highway, now Interstate 35, split St. John — alternately called St. John’s — asunder, residential plots to the east were sold to sharecroppers for $1,000 a pop. The western sector was developed as Highland Mall, now ACC Highland, and the Highland neighborhood.

“Rumor was that whole area sold for $300,000,” Williams says. “Whoever bought that property deemed that we move to the other side of the highway. The land here was more affordable.”

The newcomers to the east mostly came from rural Travis and Williamson counties. Mechanization had eliminated their cotton-farming jobs.

“We were no long able to feed ourselves in the country,” Williams remembers. “We moved to the city so folks could get jobs. Women as domestics, and men as whatever they could find.”

No place to meet

The neighborhood has changed a lot since the 1950s. It is now mostly Hispanic, with a large immigrant population.

And while Buttermilk Park spreads out in an arcing complex that includes Pickle Elementary School, a library, a Health and Human Services office and a recreation center named for neighborhood leader Virginia L. Brown, it is off-limits during class time.

“So there’s no place for the kids to go and play,” Williams says. “No meeting place, no place for family reunions. No place for neighbors to get to know each other.”

That is why she and neighbors are overjoyed that Austin Parks Foundation has awarded $100,000, its first larger-scale Impact Grant, to transform the smaller St. John Park. The addition of city bond money will mean $300,000 for the project.

The vest-pocket park sits to the west of Buttermilk Park at the tail end of Wilks Avenue. The money will go to build a gazebo and sidewalk, picnic tables, a walking trail, a drinking fountain, a community kiosk and a pet waste station, all to help make the rather scruffy patch of green, brown and gray into a playground and meeting place.

“There is still funding needed to build a playscape for children,” says Julie Weeks, the neighborhood association president who helped spearhead the St. John Park campaign. “But we continue to believe that success breeds success and that ‘Together we can do more!’ We invite others to partner with us in this effort.”

St. John Park is in Austin City Council District 4, which has the least acreage of public parkland in the city as well as the highest percentage of children under the age of 10, according to Austin Parks Foundation.

“Knowing this, when I first visited St. John Park, I felt my heart sink,” said Ladye Anne Wofford, Chief Mission Officer for Austin Parks Foundation. “It currently consists of an open lawn, a decommissioned pool and little else. With no amenities, the space lacks purpose and feels somewhat abandoned and unsafe.”

Wofford knows that Austin prides itself on being a “city within a park,” and a city with lots of parkland.

“However, many people don’t realize that much of Austin’s parkland is concentrated in certain geographical areas,” she says. “And our city doesn’t allocate enough of its budget to improve and maintain the parks that we do have.”

Wofford also points out that Austin hosts great disparities in park quality and that neglected areas like St. John suffer as a result.

“While the St. John neighborhood may be short on resources, they are rich in history, skilled at building community and aren’t afraid of hard work,” she says. “It’s my hope that other communities will see the persistence and dedication of the St. John Neighborhood Association and become inspired to take action in their own parks.”

Williams’ parents lived nearby till they died. Her grandmother had purchased two lots with “turkey money.” She encouraged her son — Williams’ father — to buy property, too, and he picked up three lots.

Yet deep into the 1970s, residents had to fight for even basic city utilities and paved roads.

“It is my understanding that when St. John School was torn down for the construction of the Home Depot, St. John Park was put on the location of the school playground as a gift back to the community,” Weeks says. “As you can imagine, a community losing a school to new development can be a difficult adjustment.”

There have been many social and cultural adjustments in the past few decades. Tensions in St. John were high in the early 2000s as the area shifted from a traditionally African-American neighborhood to a predominantly Hispanic area. Church and community leaders rallied.

“Our neighborhood believes that the path to reconciliation lies not in focusing on negativity and differences but in finding ways to bring people together to build community,” Weeks says. “To celebrate diversity, foster unity and bring celebration while honoring the rich heritage and history of our past.”

“During our first St. John Unity Walk in 2006, Pastor Harold Hendricks, whose family had lived in St. John for many years, came up with our neighborhood motto,” Weeks says. “It is still quoted today: Together we can do more! Juntos podemos hacer mas!”

Now well organized, the group came up with a neighborhood plan with the city of Austin planning process. A revitalization committee applied for the APF grant. The city’s parks and recreation department will cover the cost of supervising contractors and removing the fill-and-drain pool, a big expense.

Williams say that while lots are appraised for $50,000, they sell for $100,000 now — 100 times the original price. They are still affordable compared to those in other parts of the city. And there are lots of kids.

Many residents in St. John know Grandma Wisdom. She has published several books and pamphlets of her thoughts, including “A People Set A-P-A-R-T,” “Dick, Jane and Sally: 1947” and “Let’s Stop Putting Each Other Down.” She was interviewed at length under a pseudonym for the 2015 book “Invisible in Austin: Life and Labor in an American City,” a sociological study by Javier Auyero and a team of University of Texas graduate students.

“It’s all about love,” she says. “I have garage giveaways, not garage sales — I don’t charge anything if they can’t pay. So neighbors feel that they can communicate and talk to each other.”

People Plus Parks is a series featuring the people behind the work we're doing in Austin's parks. Check out the "People + Parks" category for more. Story: Austin-American Statesman, Photo: Ricardo B. Brazziell