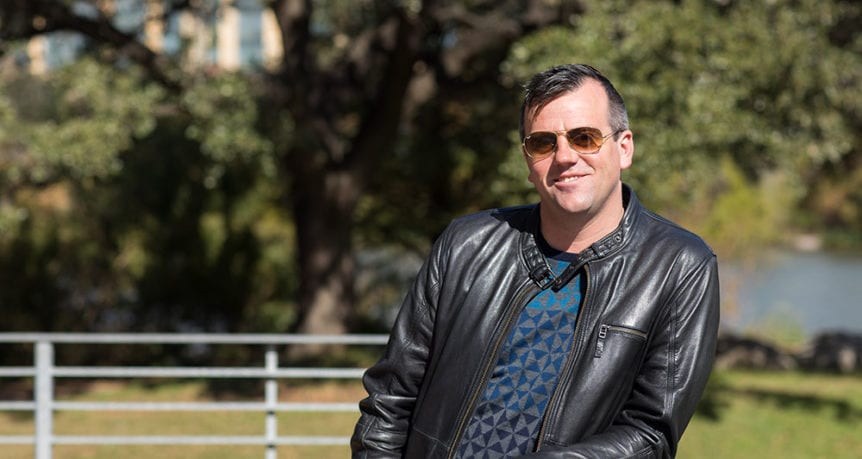 Henri Mazza is the kind of guy who brings fun wherever he goes. And for the last 15 years he’s been bringing it to theaters and parks near you.

As the V.P. of Special Events at Alamo Drafthouse, Mazza and his team work with Austin Parks Foundation to host the Movies in the Park program, a series of outdoor films that are free to the public. He calls it a dream job.

“In the very beginning this project was more of a ‘Hey! Let’s do a movie outside—that will be cool!’ kind of idea,” said Mazza. “But then we realized it’s a great way to encourage people to use and love their parks.”

Movies in the Park began in 2002 as a partnership between APF and Alamo, and it was held exclusively at downtown’s Republic Square Park near 4th and Guadalupe. Beginning in 2015, the partners began taking the movies to neighborhood parks across the city to allow people to enjoy free fun right in their own backyards.

The events have grown over the years and expanded in scope. In 2016 APF and Alamo added a fundraising element to one of the movie nights and raised more than $2,500 for APF with their first-ever Halloween Spelltacular (look for it this Halloween too!)

Mazza has worked for Alamo since the early days of the company. After graduating in 2000 with a film degree from the University of Texas, Mazza joined the staff at the original downtown theater on Colorado St. He started as a waiter and soon began wearing multiple hats – helping with promotions, programming and special events such as Open Screen Night (like an open mic but for filmmakers), sing-a-longs, and a reality dating show (which paid off considerably since he met his future wife there).

Today Mazza focuses on managing large-scale events and roadshows, plus overseeing the team that produces their live-stream simulcasts.

“We’ve got a whole team of programmers now and a lot of them are the more studious film geeks—true cinephiles,” said Mazza. “I love film, but I’ve always been the guy who asked, ‘What about having an ’80s dance party in the theater??’”

The next Movies in the Park series may not include an ’80s theme (but it will include a 1992 theme to celebrate APF’s 25th and Alamo’s 20th anniversaries), but the continued partnership between APF and Alamo is a certainty. It’s a natural fit.

“I like our joint mission of hosting movies that draw people to their neighborhood parks,” said Mazza. “In the future we may try to make the events bigger, if it’s the right park for the right type of event. With outdoor events in general you can do so much more than inside theaters…like setting up smoking cauldrons and a wading pool filled with 700 pounds of candy corn for Halloween photo booths. How fun is that?”