Chuck Foster grew up doing community service alongside his family and was encouraged at an early age to take on leadership positions whenever possible. No matter what.

“My mom taught us that regardless of what state you’re in—money or no money—you give back to the community,” he said.

That message stuck with him, and as it turns out became an anchor for him years later when he was trying to restart his life.

Foster was born and raised in Austin and was a star basketball player at L.B.J. High School. He played college basketball at Lamar University in Beaumont before moving to Kansas and finally back to Austin. It was a circuitous and bumpy journey, he admits.

“Along the way, I had a son, which changes everything. Then my sister died. Then I took a break from school,” he said. “But even though I was going through hard times, I always found ways to give back.”

Foster enrolled at Texas State University and graduated in 2013 with a degree in urban and regional planning. He spent a few years working with the City of Pflugerville before starting his own planning firm.

Once he moved near Springwoods Park in Northwest Austin, Foster found himself underneath the park’s giant oaks almost daily—exercising, meditating, writing—and he soon found his life getting back on track.

In 2015, at the suggestion of APF’s Bill Stout, who was also one of Foster’s professors at Texas State, Foster adopted the park and committed to being a champion of the 12-acre gem.

Today, Foster spends about 8 hours a week volunteering for Springwoods. He is on the grounds 3 to 5 days a week—for his own enjoyment but also to stay in touch with what the park needs.

“This is such a great place,” he said. “We have people of all different ethnicities and ages, enjoying the park in different ways. My purpose is simply to get out here and bring community together. To get people involved.”

Foster organizes events and work days and has led the past few It’s My Park Day events at Springwoods, one of which recruited more than 60 volunteers to mulch trees. Foster has been told he has a big heart.

“I know how to tap into people and motivate them to come out and get involved,” he said.

Next up on Springwoods’ agenda: adding a Little Free Library. Foster would also like to create more gathering spots for families and events. Anything, he said, that will foster community, such as artwork, murals, benches and educational and musical tools. Also high on the priority list: protecting the signature trees that fill most of the park.

“Maintaining the trees is critical,” he said. “They give so much shade, and when the sun shines through the trees onto the park…it’s just beautiful.”

Though Foster’s path leading him to his current role might have been complicated, his reason for embracing and nurturing parks is simple:

“Parks are just good for the soul.” 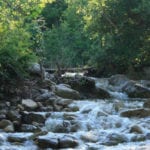