Southeast Austin park adds playground thanks to grant from APF

After lots of hard work from volunteers and workers, Ponciana Park has finally opened their finished play areas to the public. The park now features a toddler playscape, 5-12 playscape, a swing set complete with an all-abilities swing, and a wide walking path around the park. Through these improvements, the park is now a more inviting space for families in the area, that previously had very little public outdoor spaces nearby.

With summer break right around the corner, the park is ready for kids to be out of school and spending time outdoors! Friends of Ponciana Park are excited for their new areas to be used, and for the park to become a neighborhood destination. 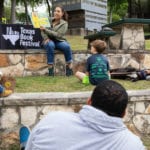