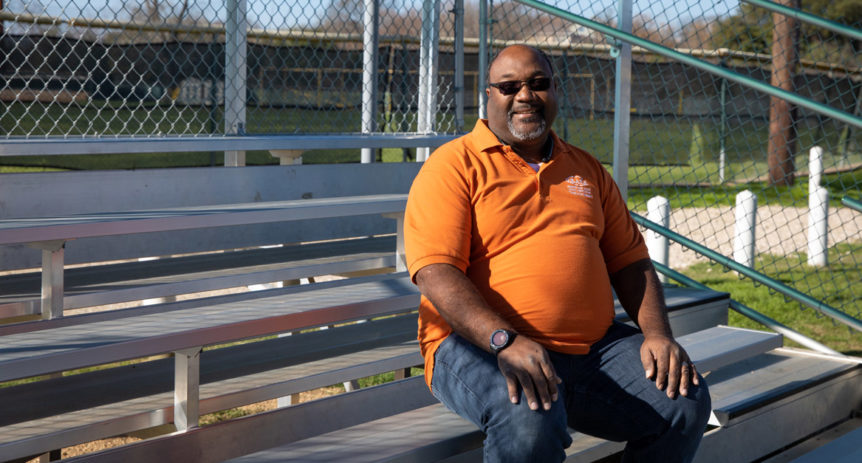 Lee Dawson Jr., a native of East Austin, has been supporting his community for decades—one game at a time. Dawson grew up in the neighborhood and still lives within walking distance to Mabson Field, a youth baseball field that is adjacent to legendary Downs Field.

Dawson volunteers his time, energy and good nature to help maintain the field, promote youth sports, and bolster community in his changing neighborhood.

On top of his full-time job with the City of Austin library department, Dawson is the Vice President of Greater East Austin Youth Association and co-commissioner for the baseball and football programs. He has been a mentor at Blackshear Elementary for 30 years and supports the LBJ High School football and baseball booster clubs.

He is a treasure to Austin. 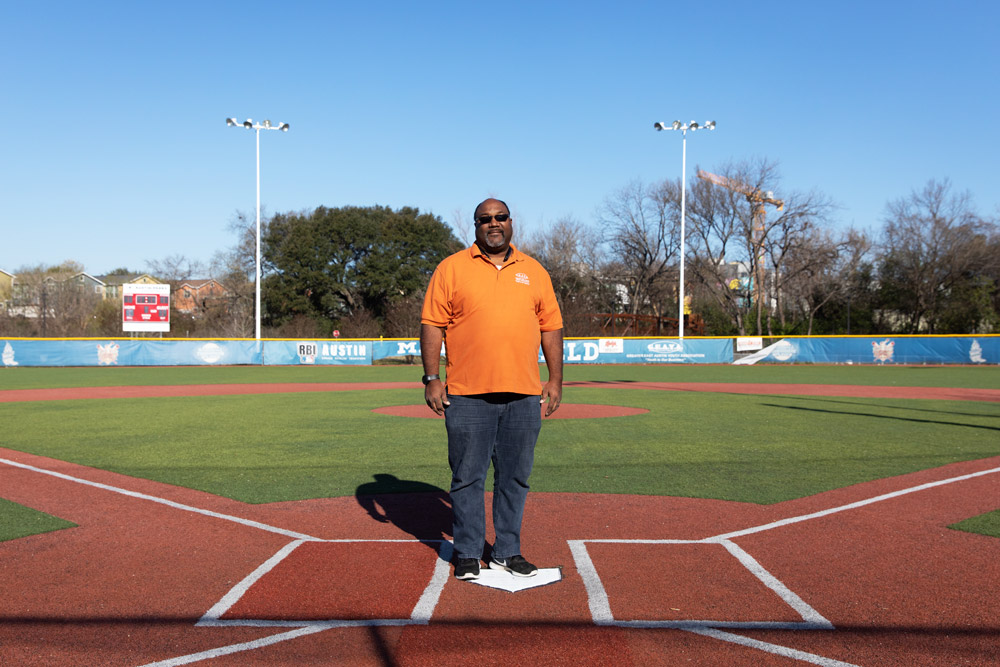 How did you become the Mayor of Mabson?

“I grew up here in East Austin. Actually, from Mabson Field I grew up on 14th Street, right around the corner there. I played sports with Greater East Austin. My coach was Mr. James Howard, who is one of the co-founders, and he’s still the president today.

About 16 or 17 years ago, my son decided to play football…and that brought me back in. I came in and Mr. Howard said, “Hey can you come and help me this one time?” Now my son is long gone—he just finished college—and I’m still here!”

This is a beautiful field. Walk us through some of the improvements…

“Before we got the turf, it was all grass, and I was in charge of mowing it. Five years ago, we worked to get a grant from the Baseball Tomorrow Fund to put the astroturf out there. The band Reckless Kelly initiated it. They wanted to do something for a little league.

Last year I was able to go through Austin Parks Foundation (APF) to get a $50,000 grant, which was so great for us because that helped us to get the new scoreboard, the new bleachers and the shade structures. We had wooden bleaches here before, and they didn’t have side rails or boards at the bottom to keep people from hurting themselves. Everything here is now geared toward safety."

The grant was awarded to Downs-Mabson as a part of APF's ACL Music Festival Grants Program.

A much needed break from the Texas heat...

"We have shade structures over a few of them. Summers get so hot here. When the families came out and saw this… Oh were they happy! Lots of families would bring their tarps to keep out of the sun. We had one shady spot, which was this area from this tree. And everyone wanted to get under that. Now we have three sets of shaded bleachers.

When the City of Austin Transportation Dept. updated the trail behind our field, they decided to put new lights up for us, and that’s at least $50,000 for those. There are still a couple more things we want to get done here, but mostly everything is just about there.” 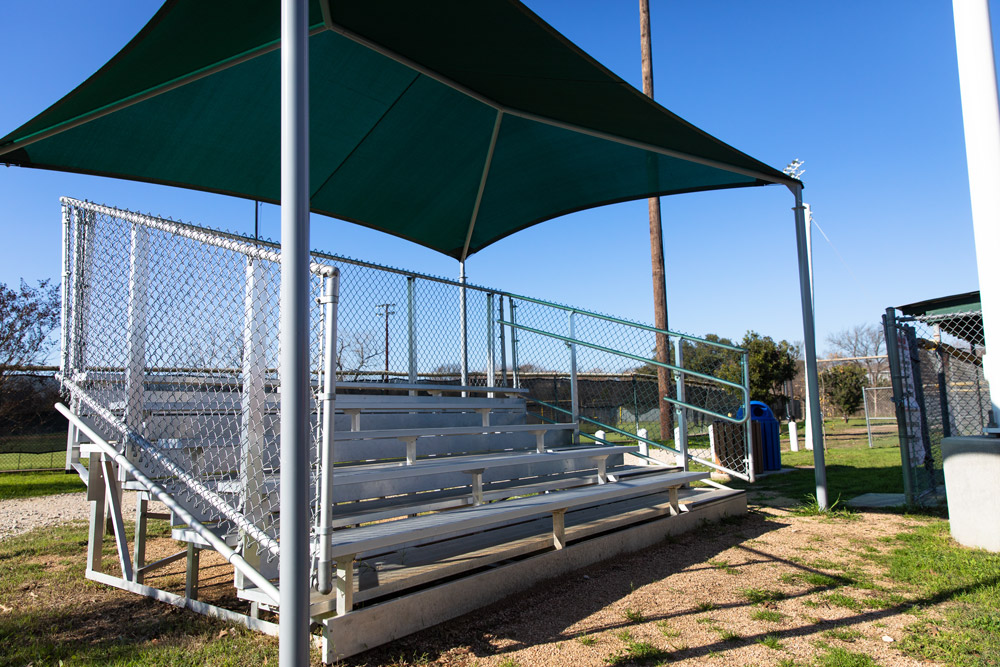 How does it feel to see Mabson Field now?

“For me, it feels great because we never had anything like this here in East Austin. If you look at this field and you go over to Disch Falk Field or somewhere like that, the same people put this field in. So, these kids get a chance to play on something they might never get to see or get to play on.

This is the only fully astroturfed field for little league here in Austin. I think there was one other league that did their infield here in the last year, but this is the only one that’s a full field of astroturf. My grandkids come out here. They want to play and I tell them how the field used to be when I was a kid versus what it is now.” 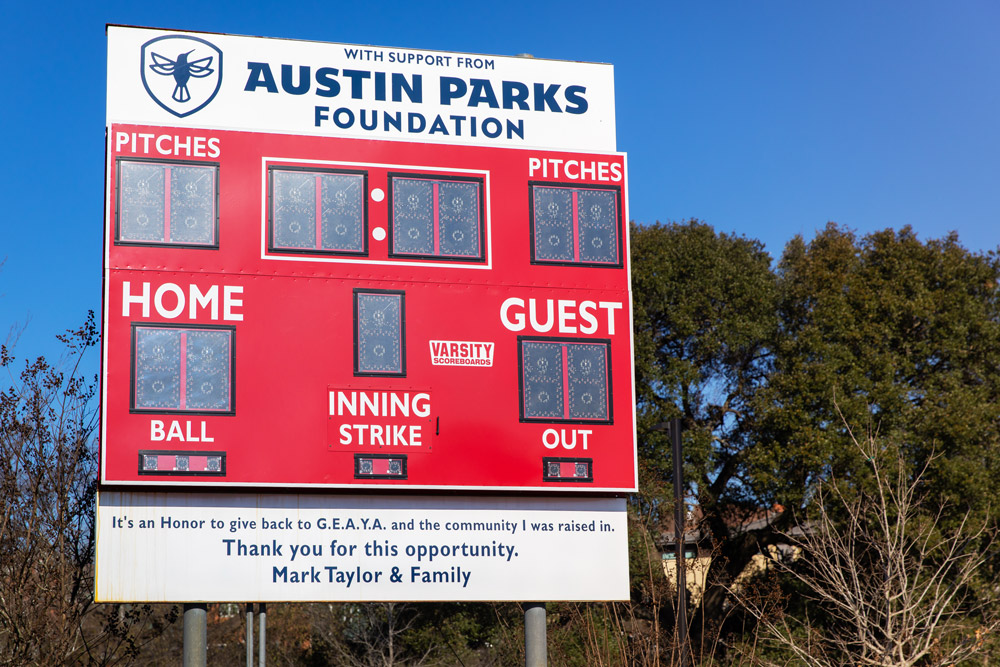 “We have a lot of foul balls that go into the street. When the games are going on, you’ve got cars parked on this side, cars parked on that side. And really there’s only enough room for one car to go through. So when the ball goes over and the kid runs out there…well, we don’t want to wait until after a kid gets hit.

So my next thing is to get a grant to put a net that goes from this pole to that pole down there. These two wooden poles are part of the old lighting system. I had them leave those up so we could use them for the netting. That will save us money so we don’t have to put a new hole in the ground and make sure it’s steady enough…because these poles are not going anywhere.”

Tell us about your players and a typical weekend here…

“We have boys ages 4 to 12 and girls can go 4 to 16 because of softball rules. We have one or two teams in each division and we inter-league with the other little leagues in town. We try to do what we can to keep our prices down so that everyone can play. We run the concession stand to make up for all the costs.

Our kids get to go to Northwest and play on those fields. Even though those kids are probably paying $200-$300 to play, ours still get to see what they get over there versus here. We like our kids to know that, ‘Hey, even though you are playing here in East Austin, you still have everything that everyone else has.’ That’s why I try to work so hard to get the grants and do all that—to get what we have here and to keep it up.” 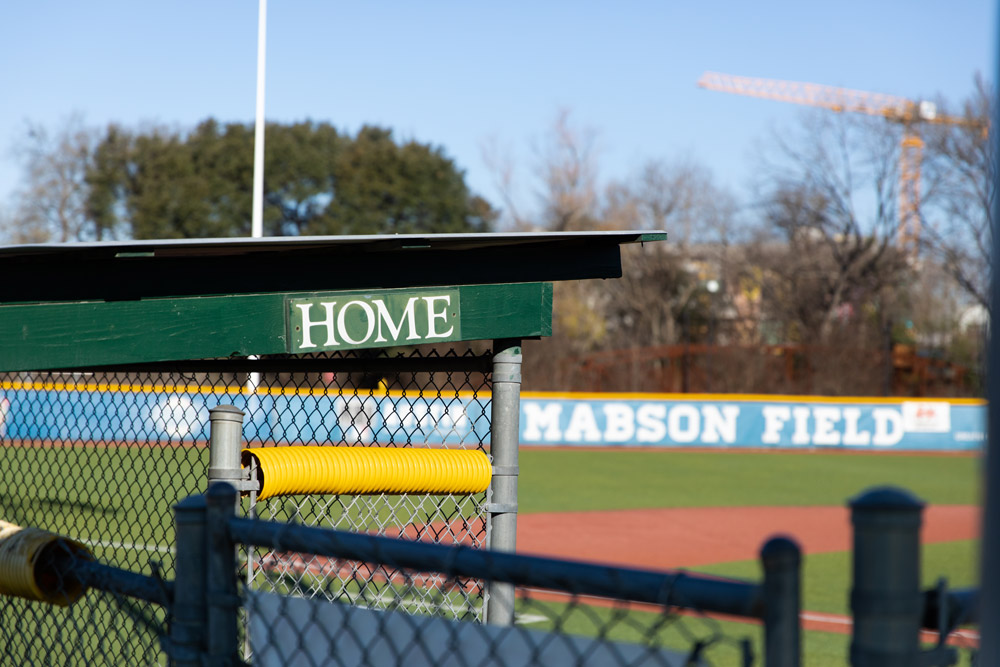 Mabson Field has a vital role in the whole community, doesn’t it?

“I think it does. The dynamics of the kids are changing, from when I grew up here. We are getting less and less minority kids in the neighborhood because a lot of people are moving out. We welcome all kids to come down here and play. That’s our main thing: to have a place for our kids to go.

Because I know… Greater East Austin was a godsend to me growing up. I grew up in a single family household because my mother died when I was a young age, and it was just my father. So we had something to do, we could go to Greater East Austin and play. I want that for the other kids who are coming up.”

You’ve done so much here - they are lucky to have you. 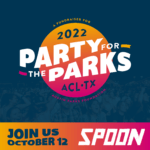 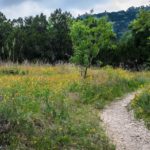 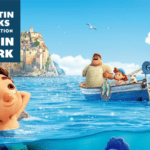 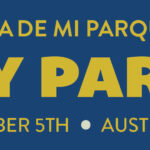