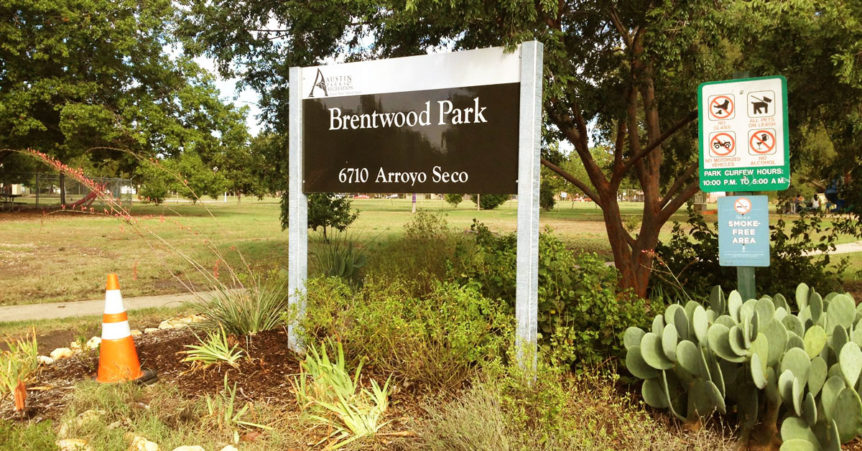 Placed right beside Brentwood Elementary School, Brentwood Neighborhood Park has been the go-to location for countless community events and individual fun for many years! This park is an essential part of the outdoor culture of this community and provides a sanctuary of green space where neighbors can escape the rush of their everyday lives.

As this passion for the park accumulated, many community members felt they wanted to go farther than just enjoying the park - they wanted to take an active role in maintaining and improving this space for future generations. As a result, Friends of Brentwood Park (FoBP) was formed in 2009! Since its creation, FoBP has been named the official park adopters and neighborhood stakeholder for projects that occur at Brentwood Park.

Additionally, this group has been a loyal steward and partner to APF, hosting It’s My Park Day projects twice a year since 2010! We are continually proud of what this community group has accomplished, and we look forward to the work that will be done in the future to make Brentwood Park everything that neighbors and community members were hoping for.

This plaque sits right underneath the Brentwood Neighborhood Park entrance sign commemorating an early It's My Park Day project. IMPD projects have been hosted at Brentwood for over 12 years!

By 2016, many members of FoBP recognized that their park had a problem. Although they all loved Brentwood Park, many families noticed that their kids were quickly growing out of the playground equipment and had nowhere to play. "By the time my kids were 3 or 4, there was nothing for them to play with on the playground,” said Nancy Mohn Barnard, chairperson of the Brentwood Playground Improvement Project. “[They] had no interest in going to the park whatsoever.”

Barnard and other community members raising their children in the neighborhood were hurt that their kids quickly lost enthusiasm for their local park. The deficits in the park prevented kids from enjoying the green spaces right outside their doors. This concern compelled Barnard and five other members of FoBP to create the Brentwood Playground Improvement Project subcommittee. This group is an offshoot of FoBP and is dedicated to the oversight and execution of the ongoing improvements to the playground.

Although the subcommittee was given the responsibility to decide what improvements should be made to the playground, they wanted to ensure the efforts of past members continued and that they maintained the integrity of the original Brentwood Park Vision Plan. The subcommittee consistently revisited this plan during every step of the project and allowed it to support their decision-making.

The subcommittee knew they couldn't make every important decision on their own. They recognized that the park improvements should benefit the entire community, and they wanted to ensure that the park could be appreciated and enjoyed by every other child and family in the area. The Brentwood Park community survey ran from January to July 2017 and garnered almost 200 responses. The survey results showed that many local residents agreed that the park was overdue for an upgrade.

Additionally, they found that respondents hoped to see various climbing structures targeted toward older kids included in the playground improvement, as well as aesthetically pleasing components like art and benches. In addition to the online survey, the subcommittee attended numerous town hall and neighborhood association meetings to gather additional input from community members. 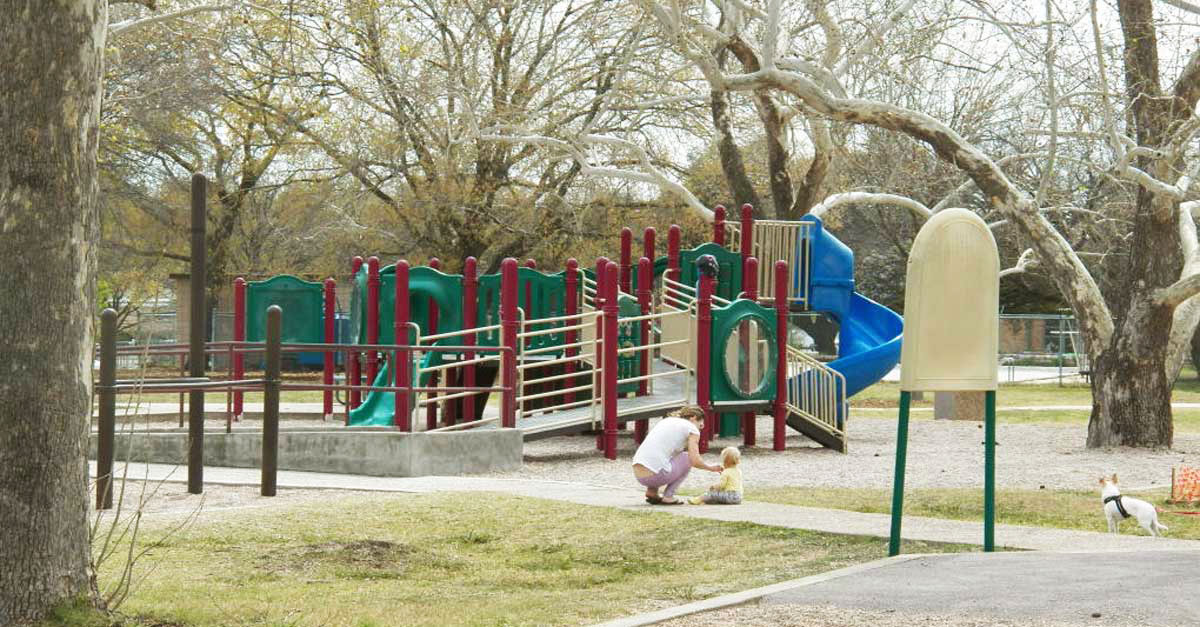 Brentwood Neighborhood Park before the playground and other improvements were implemented.

With the planning process making great headway, the subcommittee had to face their biggest hurdle: funding the improvements. While they had a great plan, it couldn’t be carried out without the proper financial resources. And this was no a small feat! In total, the project was going to cost $290,000. It seemed like a significant hurdle, but the playground improvement subcommittee was eager to take on the challenge for the betterment of their favorite outdoor space.

The subcommittee applied to and received numerous grants from multiple organizations to finance the project. In addition to the $50,000 Community Grant awarded to them by APF in 2018, they received a $40,000 grant from Violet Crown Community Works and several smaller donations from local businesses and organizations. In total they provided $88,000 in community contributions.

Although these grants allowed the subcommittee to make significant progress toward their goal, it wasn’t quite enough to pay for everything that the community envisioned. But they knew they weren’t on their own - gathering this much money required participation from everyone in the community that wanted to see the park be built!

“It required being scrappy," said Barnard when describing the long fundraising process. Many community members and local Austinites stood loyally behind FoBP and the subcommittee and donated services or supported grass roots fundraising efforts. Check out some of their largest fundraising events below: 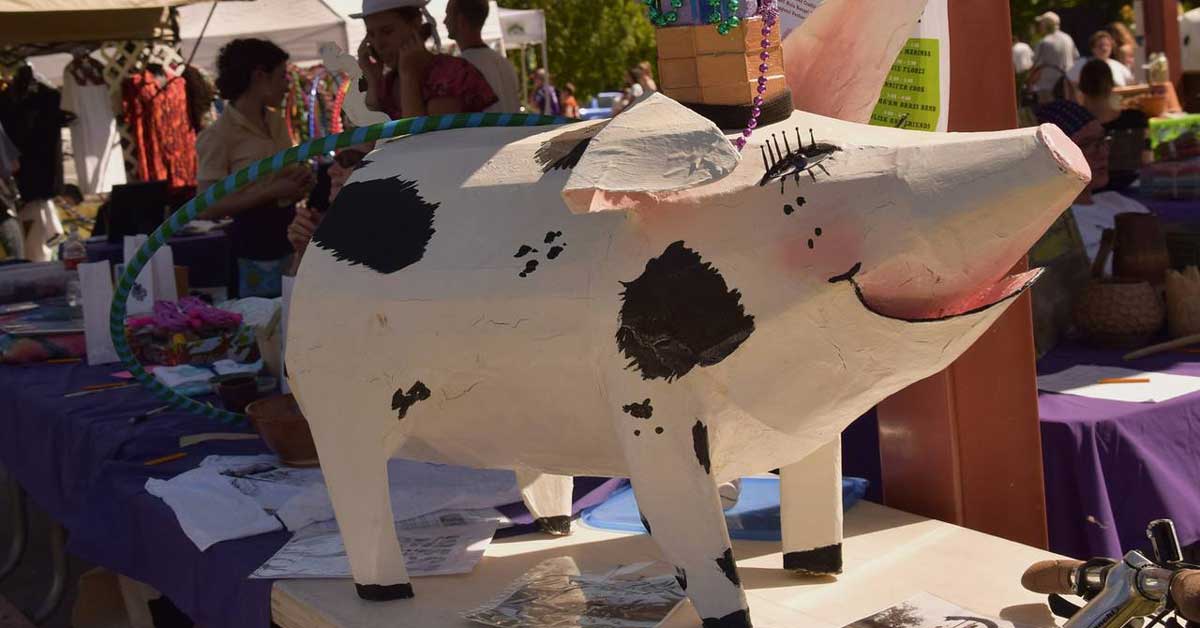 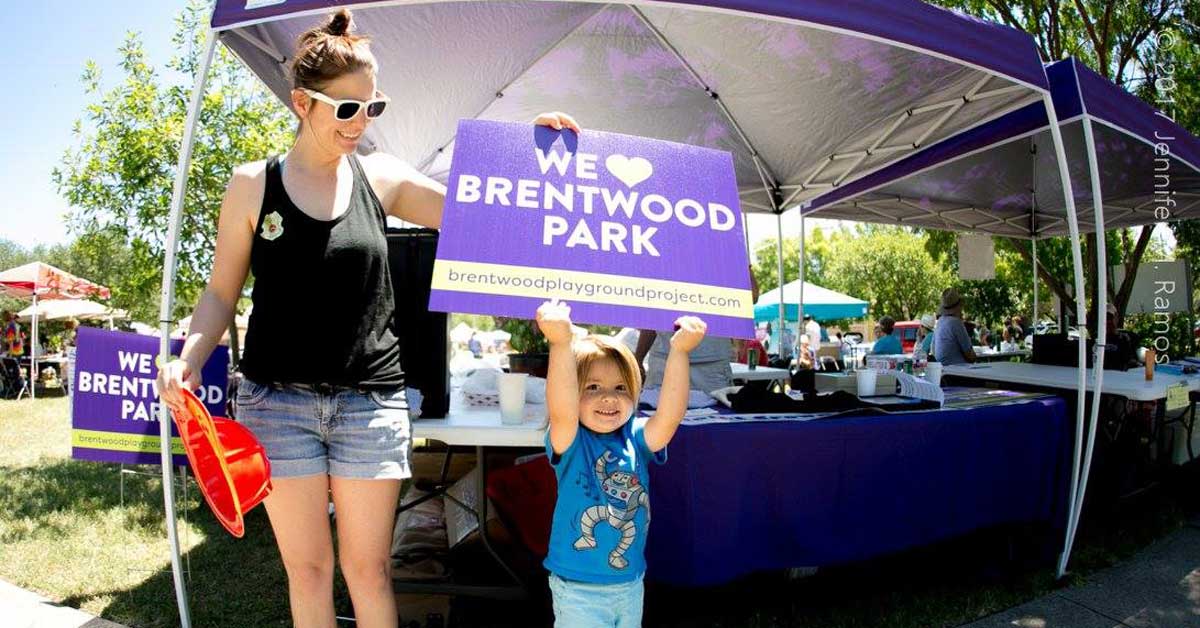 Inspired by the fundraising done by Ramsay Park, “We ♥ Brentwood Park” yard signs were sold and displayed throughout the neighborhood. Photo is from the Violet Crown Festival Facebook Page. 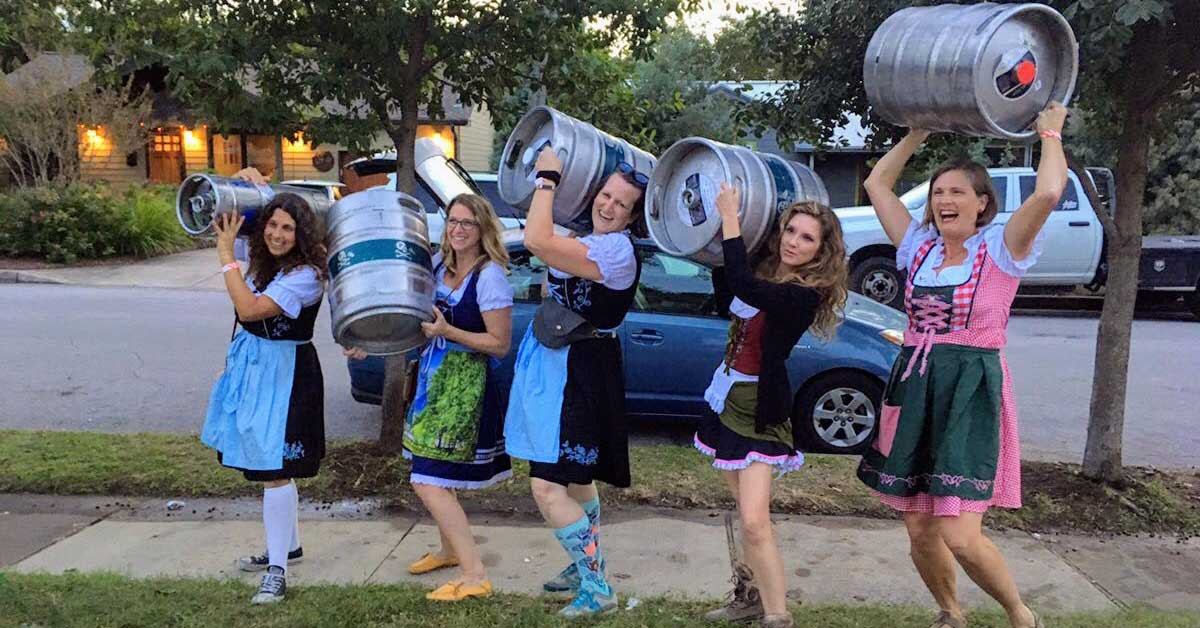 In early 2020, the moment that so many Brentwood neighbors were awaiting was finally here: construction of the new playground! Construction ended in late July 2020 and unfortunately, due to the COVID-19 pandemic, the community had to wait for a few more months before the playground could officially open.

In addition to the original equipment and swings targeted toward younger kids, Brentwood Park now has playground equipment that caters to older kids as well. They also added two dynamic climbing structures and new sidewalks for improved accessibility. These unique changes have ensured that Brentwood Park will quickly be on its way to becoming one of the iconic playgrounds in Austin.

The playground improvements have already improved the attendance of older kids at the park. The group of kids that were previously excluded from the park were now playing and having a good time in this space. Barnard says, now “every time I go I see much older kids, the equipment is always being used.” It is amazing to see these improvements quickly fill a shortcoming in this park. 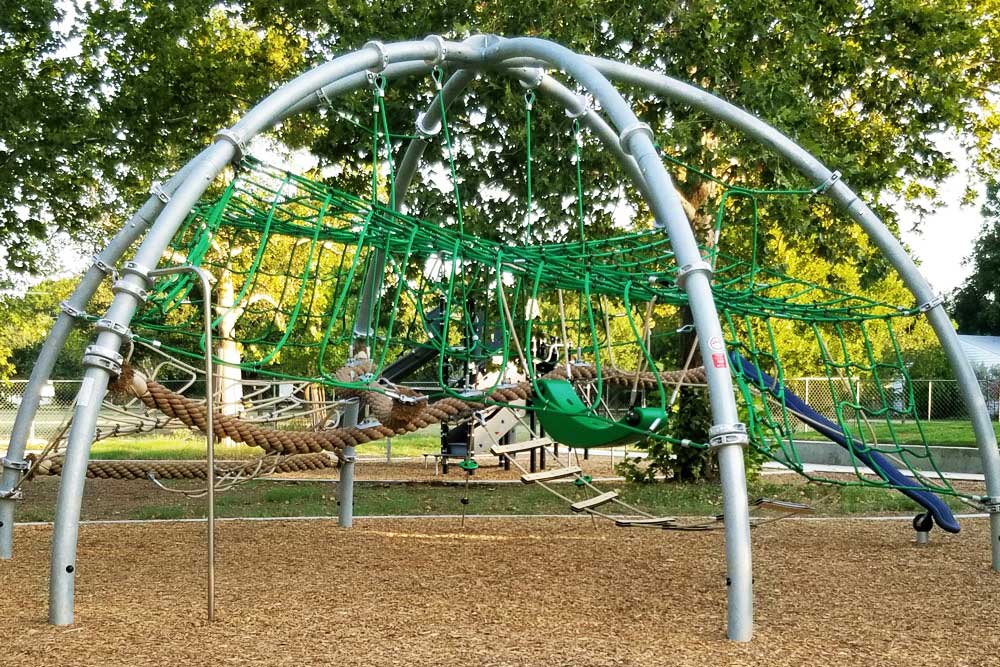 One of the climbing structures in Brentwood Neighborhood Park's new playscape!

Since the playground improvement project, FoBP has continued to show exceptional devotion to their park and have taken on projects for the general maintenance and further development of the park. To recognize FoBP's dedicated stewardship, they were awarded our Adopt-a-Park Team of the Year Golden Shovel Award at Party for the Parks in 2020.

Eventually, FoBP plans to carry out two more phases of their park improvement plan. They hope to include more playground equipment, installation of art pieces and improvement of the adult fitness equipment. We wish them the best of luck in their future endeavors, and we can't wait to see the new phases of park improvements come to fruition! 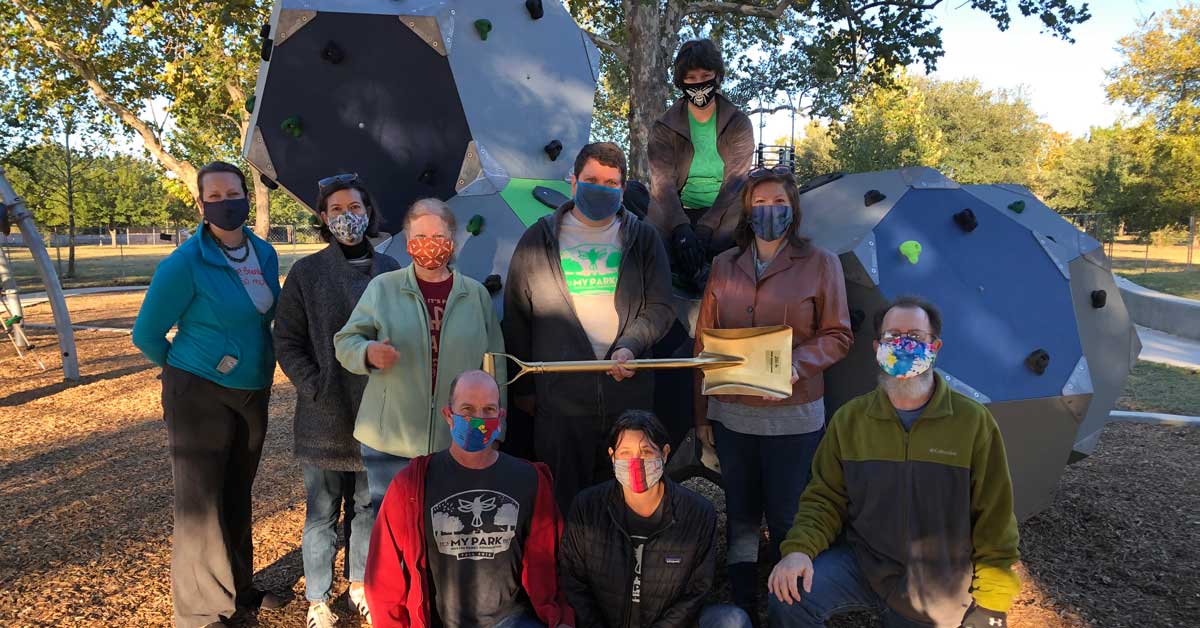 The Brentwood Park Adopt-a-Park team with their 2020 Golden Shovel Award. 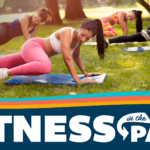